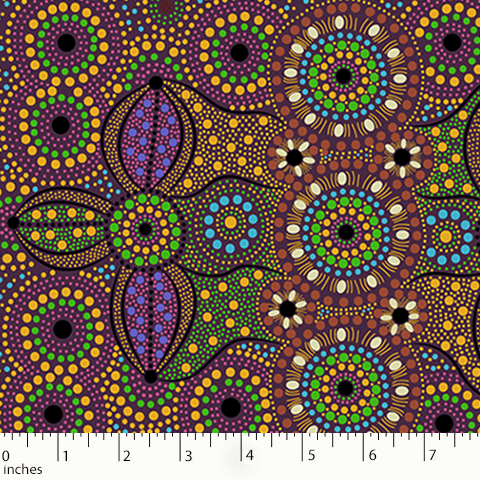 Bernadene Wallace is a well-known Aboriginal designer. She worked in Karingka Art Gallery for a period. She is the daughter of Kathy Wallace. Kathy is an excellent artist. Bernadine learnt artwork and dreaming from her mother and grandmother.
Bernadene depicted the corroboree ground. In all the tribal gatherings, many people gather around to celebrate corroboree. Her artworks beautifully depict men, women and children attending the corroboree. They often discuss religion, friendships and other social matters. All the attendees are destined to maintain pious dignity of corroboree. Nobody is allowed to break the social law.
There are plenty of bush foods for everybody. Lot of social and communal discussions take place in corroboree. The circles in dots depict that people are deeply involved in discussions setting around the waterholes. The over-shape semicircles are indicating pathways to travel. Small circles in middle depict fruit trees

Country Treasures is a quilting fabric and notions supplier located in the historic town of Chester, Vermont.